Richard’s View: Retiring from the Practice 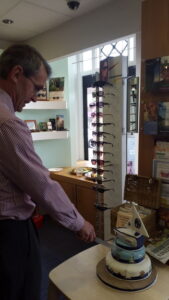 Now that it’s happened, and I’ve officially retired from my profession of Optometrist, I thought that I would tell you about my “new” office. It is mostly green, quite large and has brown bits round the edges. If I let the green bits get brown then there’s trouble – and if I let the brown bits get green bits on them where they’re not meant to be then there’s even more trouble. However, on the brown bits, the green bits that are meant to be there often change colour in the summer before becoming brown again and having to be removed. I’m sure you’ve got the picture.

A few years ago I had a go at improving the front lawn. I bought one of those hopper things that you trundle across the lawn and it drops tiny bits of lawn feed evenly as it goes along. The feed also claims to kill moss, and as a lot of the front lawn is made up of moss this is supposed to be a good thing. A year or two previously I tried to do this and ended up with alternating stripes of black, dead moss and green, healthy moss so this time I was very careful to just overlap each trundle and then, as there was some feed left over, I repeated the process at right angles to the first time.

Did I get a nice moss free lawn?

No. According to Ian, our visiting fish man, who called about a week later I had achieved the impossible and created a tartan lawn. And it stayed that way all summer.

This winter with its long warm introduction and record breaking wet months has been perfect for growing moss again so I’m afraid that I’m going to have to try once more to eradicate the stuff from both lawns, front and back. Now that I’ve got more time I don’t think I have any excuse. On the plus side I shall get plenty of exercise and fresh air and the chance to try and grow more things than previously in the places where they are meant to grow and who knows? I may even get the top of the garden tidied up and the old swing, broken garden chair, 400 cracked plant pots and three broken wheelbarrows removed.

Just because I’ve retired it doesn’t mean that the practice in Littleover is in decline in any way at all. Davina has been waiting for me to go to install some bang up to the minute new equipment and you will still get all the same care and service from the staff as you always did – or maybe even better. Ruth will be back from maternity leave next month as well and they will, of course, still be collecting old spectacles for VAO.