After 45 years of practice, Richard Petrie has retired from optometry.

Richard has been offering optometry services to Derby residents from Richard Petrie Optometrists on Burton Road in Littleover for 38 years. His official retirement comes two years after he handed the business over to owner Davina Dosanjh in 2014.

Richard wanted to mark his last day of testing in a special way, so for his last testing session, Richard sent special invitations to some of his longstanding patients to have a last eye examination with him. All of Richard’s fees from the day were donated to the two charities closest to his heart – Sight Support Derbyshire and RNLI.

In total, Richard raised £400 for his two charities and his last day of testing was made extra special when some of Richard’s family joined the team at the practice to celebrate with a surprise lunch on 31 March. 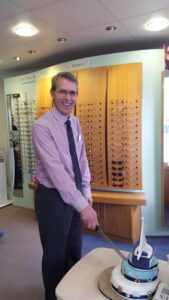 Our Dispensing Optician, Ruth made a beautiful cake for Richard dedicated to another subject close to his heart – sailing!

Richard has been reducing his hours since Davina took over the practice two years ago. Davina has just invested in the latest ophthalmic equipment to offer patients the most up-to-date eye examinations available.

You can still keep up with what Richard’s up to, as he will be carrying on writing his monthly article in the Littleover Little Book. April’s article was all about Richard’s new ‘office’ AKA his front and back gardens! We’ll continue to post his articles on our blog too!

We’re sure that everyone will join us in wishing Richard the very best for his retirement.