A first eye test can be a little daunting for children and their parents, but we try to make it as comfortable as possible for all of our patients – especially the little ones.

Alfie, aged 3, came along for an eye test with his mum Samantha last week. Samantha couldn’t find much information about when children’s eyes should be first examined or how optometrists measure children’s vision before she called the practice to book an appointment.

In part 1, Samantha described what happened during Alfie’s eye test and part 2 explained the process of choosing frames.

We were invited back to Richard Petrie for Alfie’s frame fitting less than a week after his eye test appointment.

We sat down to try on his glasses. Christine did lots of measurements and double and triple checked the fit. The arms and nose pads were adjusted accordingly and she made sure that Alfie’s new glasses sat comfortably on his face, directly in the middle of his eye line.

Once Christine was happy with the fit, everyone at Richard Petrie made lots of fuss about what a smart boy Alfie looked in his new glasses.

Davina explained to Alfie that his glasses case was a ‘bed’ for his new spectacles and that he had to clean them and tuck them in every night so that they were ready for him to wear in the morning.

The best thing about the service at Richard Petrie was how comfortable he was made to feel by all of the staff. Everyone explained exactly what was going to happen at each stage and reassured him along the way: doing the tests on themselves first or coming up with creative ideas about what was going on that Alfie could relate to – like the pirate binoculars!

I’ve already recommended Richard Petrie to three other parents and we’ll definitely be back when Alfie is due for his next eye exam – just before his fourth birthday.

No-one really tells you about how important it is to get your child’s eyes tested at such a young age – and since Alfie needs spectacles to correct his vision, I’m really glad I did! 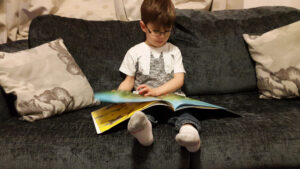 Alfie took a little bit of time getting used to wearing his glasses, but he’s had lots of support at home and at nursery. He even stopped eating dinner the other night, because he realised he’d forgotten to put them back on after his nap!