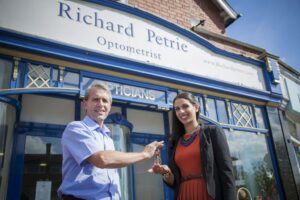 Open the newspaper or scroll through the news online any day of the week and you’re likely to hit a headline relating to the demise of the high street or the blight of the independent shop. In particular independent stores are facing fierce competition from national chains.

Not so the independent optician, Richard Petrie Optometrists which has been based in Littleover for more than 35 years. Over the last 4 decades, the practice has seen some exciting developments in optometric technology and changes in how people shop and today the business is being handed over to a loyal employee of 12 years for the next phase of its growth.

Richard Petrie started the business in Littleover in 1978 before moving 100 metres to its current premises on the North side of Burton Road. Richard had worked with a midland chain of opticians, up to that point and wanted to start his own business with a more personal and high quality approach to eye care.

In 2002 an optometry student named Davina contacted Richard about a placement and the uncanny similarities in her application were difficult for him to ignore.

Richard Petrie continues: “Davina had grown up and gone to school just around the corner from the practice and was studying under some of the very same lecturers at the same university that I attended.”

Davina worked alongside Richard throughout her degree before qualifying from City University in 2007. She gained experience with a firm of Optometrists in Cannock after graduating and joined Richard and the team a few years later and is now taking over the business from Richard. He will continue to work with Davina examining patients one day a week and supporting with the day to day running of the business.

Richard adds: “I feel very confident to be handing over the business to Davina because having worked with her all these years I know I am putting our patients  and the business in very capable hands.

“Davina has been closely involved in bringing in new equipment to continually improve our levels of service here. The most dramatic of which  is the OCT machine, which unlike a normal eye test takes 128 individual scans to show the structure of the back of the eye in incredibly fine detail and then pieces them together to create a 3D image of the back of the eye.

“The test is what Davina used to identify a potential health risk on Steve Trower’s routine eye exam. Davina recommended Steve go to see his GP after the test and he was later diagnosed with Myeloma. He received treatment shortly after the timely diagnosis which ultimately saved his life.”

Davina Dosanjh, the new owner of Richard Petrie Optometrists says: “I’m very happy to be taking over the business from Richard. Growing up in Littleover I watched Richard develop a great practice here and I was grateful to him for his mentoring during my training at University.

“The attitude Richard has passed onto the team here towards patient care and innovative techniques is what makes the practice so successful and will remain. I am pleased that Richard will continue to work with us and excited about some of the new services we’ll be offering including a new look website launching soon with an online booking system.”